The Power of Written Storytelling: The Middle: Setting the Scene by Reporting the Story to Death (Part 3)

This is the third part of a series of posts about writ­ing a story. (Again, when I write the word story, I mean a true tale, non­fic­tion). Here, I will dis­cuss how to set the scene of a story by “reporting it to death.” 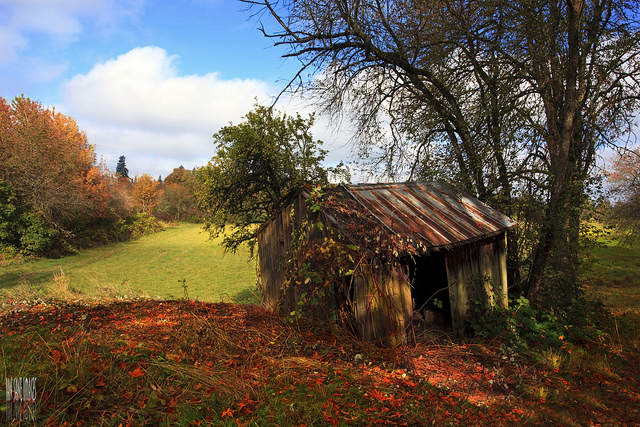 I love barns so maybe I’m just biased when I think this is beautiful. But it does raise a million questions for me. Who built the barn? What’s in the barn? Who owns the barn? Why is the barn falling down? These are questions that you can use to set the scene in your story. (Photo credit: Ian Sane)

Let’s look at another firework maker in the story I mentioned earlier. I use Prak Sam Nang to set the scene and write about how he makes fireworks.

“Prak Sam Nang sits on a wooden bench his legs crossed in front of him, dipping his hand in a pot of glue and smoothing it across the thin brown cement bags. The firework makers create the glue by frying Tapioca flour and water until it becomes a thick white substance. Using a round metal mold, they shape the paper into a curved cup.

They fit two cups together and fill them with the homemade explosive ingredients: charcoal and metal burnt and melted together. They then smooth the ingredients over with more glue and paper and attach a string covered with another layer of the thin brown paper to one end of the device.”

You might have heard the phrase “setting the scene” in relation to fiction, but you can also use it when referring to a nonfiction piece. In some ways, it’s much more difficult to write. When you report a true story, you have to be a hundred percent sure the information is hundred percent accurate. That takes a lot of work. If I remember correctly, I spent at least a couple of hours learning about firework making that I then shortened into the above two paragraphs.

Accuracy is vital because you’re putting information out into the world as fact. You not only want it to be true, but also, your organization’s name is on the piece. Double check your sources. Don’t report anything you would like to be true just to support your cause.

So how do you set the scene?

Setting the Scene by Reporting the Story to Death

You have to do something I call “report the story to death.” I’m not sure where I first heard that phrase, but it ran through my head constantly when I was a journalist. I used to tell myself if you head back to your laptop to write and the words aren’t there, you haven’t done enough reporting. You have to get closer to the story. You have to talk to more people, or more likely the same people again.

Usually, you will also need to know much more about your story than you will wind up including in the finished piece. For example, while I met the families of both firework makers, I didn’t include much about them in the story because it wasn’t vital to that specific story.

[Tweet “But to get this vital material, you still have to report your story to death.”]That is how you can make assertions like this from “Invis­i­ble Child: Girl in the Shad­ows: Dasani’s Home­less Life” by Andrea Elliott. “Invis­i­ble Child” is the piece about  Dasani, who lives in hor­ri­ble con­di­tions in a sin­gle room at a shel­ter with her seven sib­lings and her parents.

And this: “Dasani guards her feelings closely, dispensing with anger through humor.”

If you’re going to make that kind of statement, you have to be absolutely sure it’s true (one of the reasons the reporter spent 15 months on this story!). But again, if you’re working for a nonprofit or business providing direct services to people, it’s likely you have some of this background information on the people you are helping.

At the same time, if your organization’s goal is to work with and help people, you will have to be careful not to offend anyone you write about by revealing information they don’t want the whole world to know. (It will certainly be a less objective point of view than a journalist but that’s ok).

To get your point across, you might want to point out something like how the pavement makes a drastic and abrupt change from where Dasani lives to the area of town where homes are worth millions of dollars.

“She heads east along Myrtle Avenue and, three blocks later, has crossed into another New York: the shaded, graceful abode of Fort Greene’s brownstones, which fetch millions of dollars…Dasani suddenly stops, puzzling at the pavement. Its condition, she notes, is clearly superior on this side of Myrtle.”

This is information that you’ll likely have to research yourself outside of the people you are interviewing. But it’s crucial to the background and helps explain more about the area where Dasani lives.

I’ll add this next quote here, although it could probably also go in the next post I’m going to write about adding flavor to a story. I absolutely love this nugget of information. It delves deep into explaining more about Dasani’s mother, Chanel, in just two sentences.

There is so much about Chanel’s personality here. To report this, Ms. Elliott must have spent a great deal of time with this family. She learned a lot, but only included the relevant and most eye-opening pieces of information.

“As Dasani’s family approached the entrance, Chanel spotted two abandoned baby turtles in a cardboard box. She stuffed them in her pockets.

Six days later, the family arrived at Auburn [the shelter], along with its two forbidden pet turtles and Joanie’s urn.”

In “Enrique’s Jour­ney,” reporter Sonia Nazario tells us a story by interviewing many people (to verify everything) and doing her own research because she wasn’t with Enrique on his journey. Remember, “Enrique’s Jour­ney” is the story of a 17-year-old boy who trav­els from Hon­duras to Cal­i­for­nia ille­gally, usu­ally on top of freight trains, in search of his mother.  At some point, Ms. Nazario also rode the trains on that journey to understand it.

If you scroll to the end of each chapter, you’ll see the author’s notes on exactly how she reported this story. Every little detail came from someone. For example,

“He cannot let himself fall asleep; one good shake of the train, and he would tumble off.” (Under the notes for heat and staying awake, it says this information came from Enrique and other immigrants. Also, “Nazario rode on one train where a chorus broke out at 4 a.m.”).

Plus, she researched what others have found about the journeys these boys take.

“The journey is hard for the Mexicans but harder still for Enrique and the others from Central America. They must make an illegal and dangerous trek up the length of Mexico. Counselors and immigration lawyers say only half of them get help from smugglers. The rest travel alone. They are cold, hungry and helpless. They are hunted like animals by corrupt police, bandits and gang members deported from the United States. A University of Houston study found that most are robbed, beaten or raped, usually several times. Some are killed.”

As this story is in pieces, Ms. Nazario includes a couple of sentences of context in each chapter to reorient the reader. If you’re writing a long story like this, you might want to consider something similar. For example, I have included a phrase describing what each story is about again in case you don’t remember from the previous post, or in case you’re reading this post first.

I assume you will be writing this for the web, so linking back to the previous piece with further explanation is also important.

In “Graves of Cot­ton,” the piece about farm­ers in India committing sui­cide mainly because of large amounts of debt, Fer­nando Molina Cortés writes,

“That same evening her husband disappeared and came back hours later, drunk, covered in mud and with bruises on his hands. Then, she says, he left the house that night as if he was walking towards a deep emptiness, until he got lost in a shiver of stars. The next morning, with the first light, she found him writhing in agony, on his last gasps of life.

…The drought had killed all the crops. This meant no income at all, which in turn made it impossible to repay the debts. Rahul could not stand the prospect of losing his land to the loan sharks. Indeed, she says, what he lost in the end was hope. One small bottle of pesticide was enough to take his life away.”

Rahul’s widow probably told Mr. Cortés this story. Less than two paragraphs, but a very painful conversation. I’m assuming Mr. Cortés must have talked to the widow for some time to gain her trust so she was willing to open up and tell him these details.

In “Grow­ing Upside Down,” the story of 10-year-old Juan, who makes bricks to help his family earn a liv­ing, Mr. Cortés provides a detailed description of Juan’s day.

“Juan gets up at three a.m. and starts work at four, when the world outside is still a sea of dust lit up by the moon and the air comes cold as steel. It’s time for him and his dad to prepare the clay with soil stolen from the plain and water sucked out of a well. They have to do this at night so the blaze of the day doesn’t dry out the mixture.”

Again, to get this information, Mr. Cortés must have spent hours with Juan to gain his trust (I’m leaving out the father as it’s suggested that his dad didn’t trust the author). This trust must have been strong as time is very precious to Juan.

Don’t include everything and the kitchen sink in your story

It’s always going to be difficult, especially if you’re a details person (which I am), to not get bogged down and include everything you know in the piece. But [Tweet “Editing out anything unnecessary will give your story power. “] It will make it much more likely that the reader will finish and remember the story.

So cut and cut as much as you can, and then cut some more. Ask yourself, does this really need to be there? Is this crucial to the specific story I’m trying to tell? Or is it another story for another time?

Even though I originally included setting the scene descriptions from each of the six stories I mentioned earlier, I went back and edited a couple of examples out. I realized they weren’t as good as the other examples, and they didn’t add anything. Sometimes less is more.

It may seem like I’m being a bit contradictory telling you to report the scene to death, then saying don’t include everything you’ve done. But honestly, the only way to get the amazing details of the story is to follow this process. Unfortunately, there’s no shortcut, but it can be fun!

I’m breaking up the middle of the story into different sections, as there is so much to cover so stay tuned for the next part, which will continue discussing writ­ing the mid­dle of the story.