The Power of Written Storytelling: The Beginning (Part 1) 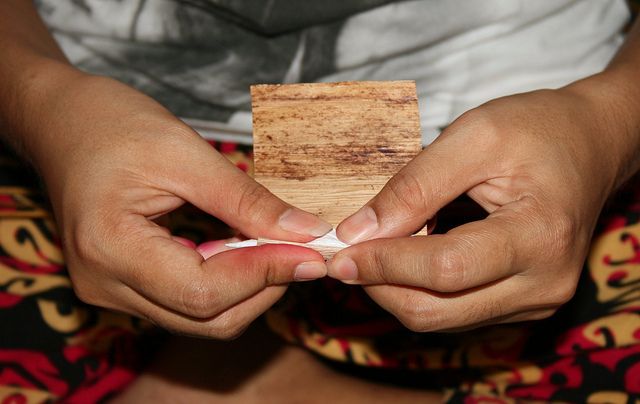 Fireworks are homemade in many countries around the world. (Photo credit: Brunty)

For five years Chea Chok sat by the shade of a tree in his yard outside Phnom Penh, Cambodia making fireworks by putting explosive ingredients into makeshift tubes. Then one day his attention slipped for just a minute and he thinks he probably added too much of one ingredient.

The firework exploded, badly burning Chea Chok’s left hand and right eye. Unconscious, he was driven to a hospital 40-km away, where part of his arm was amputated. His eye, turned light blue, is now useless.

This is the start of a story I wrote in 2002 when I was in Cambodia. Let me be clear. When I write the word story, I mean a true tale, nonfiction. I’ve never forgotten talking to him about it about a year after the accident, when, for lack of options, he was back at his trade.

Why It’s Important for Organizations to Tell Their Own Stories

I believe stories like this can be found everywhere, whether you work for a nonprofit or a business. You just need to spend enough time with the people you are helping to be able to find them. I understand this can be difficult, especially if it’s not part of your regular job description. It’s often easy to get bogged down with daily duties.

In other instances, media relations managers focus their attention on getting the organization’s message out to the media. While this is fine, someone in your organization should also be aware that a big part of what you should be doing is telling stories to your audience directly. This allows your audience to feel a greater connection to you. (By the way, this is what big brands are doing. I’m going to write a separate post on that soon as well).

Once you get past these hurdles, it’s also important to craft a compelling story that will immediately grab the reader. It’s essential to identify what the crucial part of the story is that will do this, as well as how to structure it. I’m going to discuss this with examples below.

You have three sentences or fewer to catch your readers’ attention and convince them your story is worth reading before they move on to something else. Let’s think about what we read in the news. We read articles that have hard news headlines and that state the who, what, when, where, how, and why in the first couple of sentences. These articles serve the purpose of getting you the crucial information up front.

But you’re not going to be writing hard news pieces. So what you want to do is draw the story out. Sometimes in the news we find longer feature articles. That’s what you want to focus on here in order to connect with your audience. You want to begin a story with a big emotional impact that leaves the reader asking questions and wanting more information. These are the kind of stories that stick with you long after they have been published.

Let’s look at some examples from journalists below.

Hooking your audience when writing long

There have been a number of blog posts recently suggesting that when you write long, people are more inclined to share your posts. For example, in a webinar in late 2013, blogger and entrepreneur Jon Morrow said that long posts (about 1,500 words) get more traffic than shorter posts, and that posts longer than 3,000 words get even more traffic. He said shorter posts get shared less as they do not have the perception of value that longer posts do.

While I prefer longer pieces most of the time, I have to be immediately pulled in to what’s being said. Like many people, I have to be convinced right away that there is a story there, and it’s worth my time to keep reading it.

Take this recent article, “Invisible Child: Girl in the Shadows: Dasani’s Homeless Life” by Andrea Elliott, that was in The New York Times. This is an extra long piece that took 15 months to develop.

Few people or organizations have the resources to invest that much time and effort into one story. However, because of your work, you are often directly in contact with those you help, and learning their story is a natural part of your job. You may know far more about your cause than you realize. All that background information will come in handy.

By looking at the opening of “Invisible Child,” you can learn a lot about how to begin a story that will pull a reader in.

“She wakes to the sound of breathing. The smaller children lie tangled beside her, their chests rising and falling under winter coats and wool blankets. A few feet away, their mother and father sleep near the mop bucket they use as a toilet. Two other children share a mattress by the rotting wall where the mice live, opposite the baby, whose crib is warmed by a hair dryer perched on a milk crate.”

First, the words are powerful, full of emotion. There is no question they have your attention.

When telling a story, this is something that organizations need to do more of — take things a bit slower, communicate the details, draw the reader in. Make the reader emotionally invested. If you read the behind-the-scenes story about this family, you will also learn that many people contacted the paper about donating money.

In fact, reporters are often contacted after stories like this asking how they can donate money. (Yes, The New York Times has a wide audience, but telling a similar story to your supporters will make them more emotionally invested in your cause. This kind of story stays with you).

A single story can also be told across many channels, including email, website, video, and social media. It doesn’t and shouldn’t have to be told one way. You might be able to expand it on your website, but then promote it and link to it from any one of your social media channels.

Take a look at this story about “Enrique’s Journey.” It was published in 2002, and I read it then. It won a Pulitzer Prize and eventually author Sonia Nazario expanded it into a book, which is on my reading list. But this story of Enrique has stayed with me for over 10 years.

Let’s look at the opening.

“The boy does not understand.

His mother is not talking to him. She will not even look at him. Enrique has no hint of what she is going to do.

Lourdes knows. She understands, as only a mother can, the terror she is about to inflict, the ache Enrique will feel and finally the emptiness.”

Again, there are many things that are part of this opening that draw you in. The words are powerful, full of emotion. There is no question they have your attention. And, again, this is going to be told to you as a story so it will be easier to read.

Hooking your audience when writing shorter

While I prefer longer pieces, I still think shorter pieces can work just as well. There is less time to draw the reader in, so many times you will see the point of the text is much higher up, and the pace of the story is faster.

Look at these examples from Narrative.ly, “a platform devoted to original, in-depth and untold stories,” that launched in 2012.

Here’s the opening from “Graves of Cotton” by Fernando Molina Cortés.

“Rahul Udebham’s wife tells me about the morning before it all happened, when the loan shark came to claim payment of all the debts, how he paced like mad among the cotton plants screaming: “If you don’t pay, this land will be mine!”

Again, powerful words, and it reads like a story.

Here’s another opening from “Growing Upside Down” by Fernando Molina Cortés.

“Imagine the world upside down. Imagine tomorrow morning, you’re getting your son or daughter ready for school. All of a sudden you notice that your progeny isn’t carrying a backpack; he or she is carrying a steel pickax and shovel. Not a toy one for the beach, but a real one, the heavy kind that put blisters on their fingers. When you’re about to help them cross the road you see the track lines on their hands from hours working in the sun. You can’t believe it when you hear ‘I’m going to work’ come out their mouth, with the authoritative tone of a ten-year-old who is used to bringing home the family’s daily bread. This is the other side of the looking glass.

The ‘other side,’ that is, depending on which side you’re on. To Juan Huachaca, a ten-year-old Peruvian boy who works making bricks in Huachipa, a town on the outskirts of Lima, there’s nothing strange about it.”

Check out “The Price of Precious” by Jeffrey Gettleman at National Geographic.

“The first child soldier pops out of the bush clutching an AK-47 assault rifle in one hand and a handful of fresh marijuana buds in the other. The kid, probably 14 or 15, has this big, goofy, mischievous grin on his face, like he’s just stolen something — which he probably has — and he’s wearing a ladies’ wig with fake braids dangling down to his shoulders. Within seconds his posse materializes from the thick, green leaves all around us, about ten other heavily armed youngsters dressed in ratty camouflage and filthy T-shirts, dropping down from the sides of the jungle and blocking the red dirt road in front of us. Our little Toyota truck is suddenly swarmed and immobilized by a four-and-a-half-foot-tall army.”

This one grabs you because it reads like an adventure story or a spy novel. From the subtitle, you already know it’s going to be about conflict minerals in Congo. The words are powerful, full of emotion.

Stay tuned for part two, which will dis­cuss writing the middle of the story.