The Power of Written Storytelling: The End: Why Write Awesome Endings? (Part 5)

This is the fifth part of a series of posts about writ­ing a story. (Again, when I write the word story, I mean a true tale, non­fic­tion). Here, I will discuss the importance of a great ending. 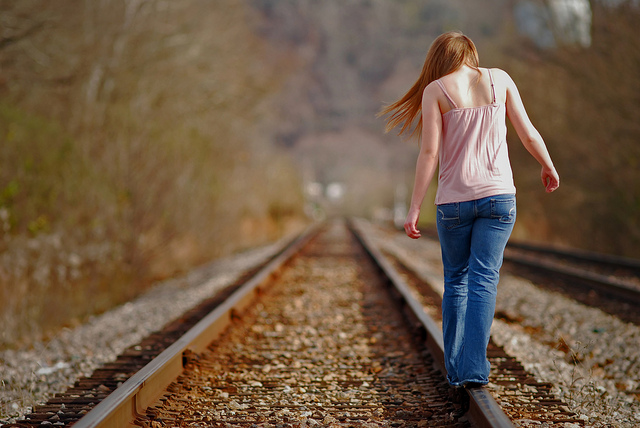 I always like train tracks, and they remind me of great endings. Maybe it’s because it’s a hint of the future; the journey that you can still go on. (Photo credit: Barta IV)

I’m really into endings. Story endings, that is. Endings that make reading the whole story worthwhile. So you can sit back and reflect in the awesomeness of the moment, not jump up and down in frustration, or worse still, quietly forget it.

If I watch a movie and the ending is terrible, I’ll probably hate the entire movie, even if I’ve liked it up until that point. Or if don’t like a movie that much, but actually make it to the end and the ending is awesome, I will probably say I thought the movie was at the very least good.

(This is a bit off-topic, but so you can totally relate to what I mean by mind-blowing endings before we get started, here are three movies that fit that bill. If you haven’t seen them, now is the time. You can even call it homework: “The Usual Suspects,” “Fight Club,” “Fargo.”)

Oh, and if you haven’t read the stories I’ve been mentioning in these posts, I’m warning you now there will be some spoilers.

It’s true that many people don’t read to the end of your story. Despite that, you want to have a solid ending because the people that make it to the end — and love the ending — are going to be your “super fans.” These are the people that matter the most. You’re writing the story not only so you can feel like you produced your best work, but so these “super fans” can share it.

There’s also those people, like me, who’ll read the end even if they skip over some parts they find boring. Many times, it’s simply to know how the writer ended it. In some cases, if the ending really blows me away, I will go back and read the parts I’ve skipped.

Here are some tips I’ve either used or come across on story endings.

So, What are Some Examples of Great Endings?

Ms. Elliott starts to wrap up the story at the beginning of the last chapter. When you are writing a story this long, the ending is more than just the last paragraph (even though that final paragraph is one of the most important parts).

Dasani and her family move into an apartment. In fact, they should never have been living in the Auburn homeless shelter, because the state ruled that it was not an adequate environment for certain children. This includes Dasani’s one-year-old sibling, two siblings with asthma and another sibling who is legally blind. (The state intervened because a three month old baby died in a neighboring apartment, which may have been related to her living conditions).

Dasani and two siblings end up at the school where Dasani has a powerful connection with one of the teachers and the principal. The last paragraph reads:

“The child skips down the hallway toward her mother and sisters. The front door swings open, bringing a rush of air. Together, they step out into the cold.”

The story ends with hope and skepticism. Dasani and her family moved into an apartment and she’s happily back at the school where she wants to be. She’s so happy she’s skipping, however, despite this the author says they are stepping “into the cold,” unsure what the future will bring for Dasani. Again, the story began with Dasani, and while it included other characters, it had to end with Dasani.

In the last chapter, you read about the end of Enrique’s journey — about him crossing the river and traveling by smuggler to Florida, and then to his mother in North Carolina.

The story ends with Maria Isabel and Enrique discussing their options for the future. Sadly, they also agree to leave their child behind if Maria Isabel has the chance to go to the United States.

“If I have the opportunity, I’ll go,” Maria Isabel says. “I’ll leave my baby behind.” Enrique agrees. “We’ll have to leave the baby behind.”

Because the last chapter hints at the end, these last two paragraphs are not as abrupt as they might seem. If you haven’t yet read the stories, skim the last chapter to get a greater understanding of this.

It also ends with a powerful quote, one that links it back to the entire story. We wouldn’t be reading the story if Enrique’s mother had not left him. And now Enrique is agreeing to do the same thing to his child.

Mr. Cortés asks Juan a question in the second to last paragraph. “‘What do you want to be when you grow up?’”

“I want to be a truck mechanic when I grow up and not keep filling [the brick molds with clay] because it’s messing up my hands and I’m getting scars,” he replies.

While it might seem depressing to most readers, it’s actually hopeful. For Juan, being a truck driver would be a big step toward a better future.

Then the last paragraph brings it back to the beginning and title of the article, “Growing Upside Down.” These are kids that most of the readers of this article rarely encounter, yet too many of them exist.

“Juan’s hands are already streaked with time. He’s spent too many summers on a metal seesaw that doesn’t see or saw. He’s flying a clumsy kite that can’t get off the ground because the wind is fickle. Juan is an adult in a child’s body. He’s a kid from the other side.”

This story is different because the author inserts him­self into it a lot. Remember, he’s the journalist in the east­ern side of the Demo­c­ra­tic Repub­lic of Congo.

Mr. Gettleman winds the story down by quoting an official from the United Nations, who attempts to explain why they were held and interrogated. He then adds there might not be a solution to fix Congo.

The last paragraph is the journalist and photographer flying out of Bunia (a goodbye to Bunia — treasure and chaos combined — and an ending).

“The next day we flew out of Bunia in a small prop plane. Below us, the banana trees faded into dark green swirls and the thatched-roof villages turned into tiny brown dots as we crossed over the same beautifully sculpted mountains where all that treasure lay buried.”