The Power of Written Storytelling: The Middle: Adding Flavor (Part 4)

This is the fourth part of a series of posts about writ­ing a story. (Again, when I write the word story, I mean a true tale, non­fic­tion). Here, I will dis­cuss what I mean by flavor and how to add it to your story. 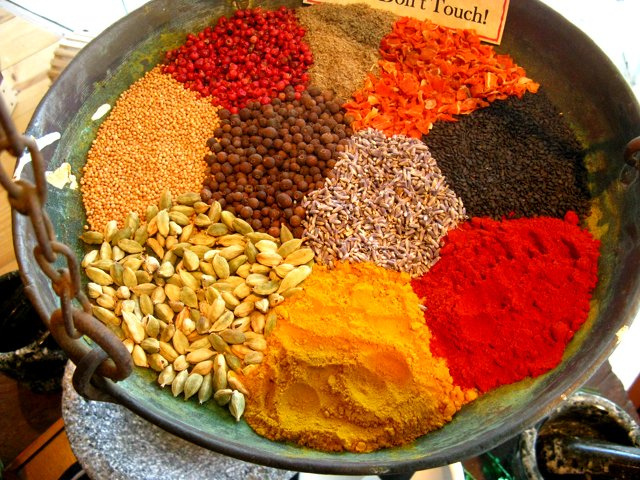 Adding some flavor to your story is just like adding spice to your soup! You need to add just the right amount. (Photo credit: Clyde Robinson)

“I like the sound of boom, boom,” firework maker Reach Ravuth said.

This is flavor. Flavor is that creative little extra that’s added to the story to show (not tell) readers a detail they wouldn’t get otherwise. It’s usually not necessary to tell the story, but it’s vital to make the story spicy. It makes it come alive. That Reach Ravuth likes the sound of fireworks going off shows you a bit of his personality.

He also says he’s not afraid of having an accident. Perhaps because the $250 a month he gets from making fireworks is good money. Perhaps because he was a soldier in the 1980s so he is still full of bravado, or perhaps because of his long experience with fireworks. He says he weighs the ingredients carefully and takes his time.

When I see flavor in a story I’m excited. It’s what makes the story sizzle. As a storyteller you have flexibility over what you decide to include. The same story could be told differently depending on who is telling it.

Slang, Song, and a Video Game

“Invis­i­ble Child: Girl in the Shad­ows: Dasani’s Home­less Life” by Andrea Elliott has so much flavor, it’s difficult to quote one part of it. Remember, it’s the piece about Dasani, who lives in a single-room in a shelter with her seven sib­lings and her parents.

Ms. Elliott shows you Dasani’s personality by inserting Dasani’s own words into the story.

“She begins calling herself ‘ghetto.’ She dares the girls to fight her and challenges the boys to arm-wrestle, flexing the biceps she has built doing pull-ups in Fort Greene Park. The boys watch slack-jawed as Dasani demonstrates the push-ups she has also mastered, earning her the nickname ‘muscle girl.’”

I love that she calls herself “ghetto,” and that the reporter includes it. Ms. Elliott also doesn’t just say Dasani is strong; she shows you how. It’s not just a few pull-ups here and there. It’s serious. She’s challenging others, and reminding you how young she is.

Here’s a great quote from Dasani’s mother, Chanel, showing you how proud she is of Dasani. At the same time, it highlights Chanel’s personality.

“‘My baby’s going to the Olympics,’ Chanel crows. As they walk west along Willoughby Avenue, they talk of finding a trainer. Chanel starts singing her favorite Luther Vandross song, ‘A House Is Not a Home.’

The girls have heard it enough times to sing along.”

Ms. Elliott also includes the words to the song in the article. This adds flavor, while emphasizing how happy Chanel is about what Dasani has accomplished (and for what it is exactly, read the article!).

“If Dasani could design her own video game she would call it ‘Live or Die.’ The protagonist would be an 11-year-old girl fighting for her own salvation.”

By telling you what Dasani would call her video game reveals so much about what Dasani understands about her situation. The reporter does not need to explicitly state Dasani knows she was born into the bottom of society. Many relatives have died, gone to prison, or turned to drugs, and Dasani has to fight harder than most to succeed in life. With that one video game title, you know Dasani understands this.

“Enrique’s Journey,” the story of a 17-year-old boy who trav­els from Hon­duras to Cal­i­for­nia ille­gally, usu­ally on top of freight trains, in search of his mother, is also full of flavor.

The author tells us many times that Enrique travels north to find his mother. But to hear it directly from him is powerful.

“‘It’s OK for a mother to leave,'” he tells a friend, “‘but just for two or four years, not longer.'” He recalls her promises to return for Christmas and how she never did. “‘I’ve felt alone all my life.'” One thing, though: She always told him she loved him. “‘I don’t know what it will be like to see her. She will be happy. Me too. I want to tell her how much I love her. I will tell her I need her.'”

On his way to say goodbye to his grandmother, he runs into his father, who, after Enrique asks him for money, “gives him enough for a soda and wishes him luck.”

This piece of information isn’t critical to the story, but it explains why Enrique feels he needs his mother so badly.

Ms. Nazario includes Enrique’s native language of Spanish in several places throughout the article to show you exactly what it was like for Enrique.

Here are a couple of examples:

“Ahead is Mexico, with its southernmost state of Chiapas. ‘Ahora nos enfrentamos a la bestia,’ immigrants say when they enter Chiapas. ‘Now we face the beast.’” (It is a notoriously bad area riddled with crime).

“‘Se lo comio el tren,’” other immigrants will say. “’The train ate him up.’” (If a migrant runs too slowly and the ladder yanks him and the train wheels will take an arm, leg, or life).

Adding in the Spanish language makes it more authentic and reminds you that Enrique is from a different world than most readers of the Los Angeles Times (where the story was first published).

Here’s another piece of great information that helps you understand the people Enrique meets. It is cruel, but life is cruel to them.

“Sending this boy to a doctor would cost the county $60. Burying him in a common grave would cost three times as much. First, Diaz would have to pay someone to dig the grave, then someone to handle the paperwork, then someone to stand guard while Enrique’s unclaimed body is displayed on the steamy patio of the San Pedro Tapanatepec cemetery for 72 hours, as required by law.”

So they decide to help Enrique. It’s implied that they are kind, that they might help him anyway, but they have no choice but to calculate these costs where they live.

Ms. Nazario also mentions other migrants to remind you Enrique is one of many immigrants traveling north.

“Some migrants rely on a special prayer, ‘La Oracion a las Tres Divinas Personas‘ — a prayer to the Holy Trinity. It has seven sentences — short enough to recite in a moment of danger. If they rush the words, God will not mind.”

This time she reminds you many are very religious, believing God has a set path for them.

At other times the journey can be exciting.

“The train enters a tunnel, the first of 32 in the Cumbres de Acultzingo, or the Peaks of Acultzingo. Outside is bright sun. Inside is darkness so black that riders cannot see their hands. They shout, ‘¡Ay! ¡Ay! ¡Ay! ¡Ay! ¡Ay!’ and listen for the echo.”

At the end when Enrique calls his mother to ask her to send the money to the smugglers, Ms. Nazario quotes Enrique’s mother asking him about his shoes to make sure it’s really him. She isn’t completely sure about his voice as they didn’t talk on the phone much.

“‘What kind of shoes do you have on?’ she asks.

Fear drains from his mother like a wave back into the sea. It is Enrique. She feels a moment of pure happiness.”

Sarcasm, Small Shoes, and a Mechanic

In “Grow­ing Upside Down,” 10-year-old Juan makes bricks, or what author Fer­nando Molina Cortés tells you the laborers call “working the land,” to help his fam­ily earn a liv­ing. Mr. Cortés doesn’t have to tell you that’s what they call it, but it adds flavor. It also tells you that so many families “work the land,” they have a name for it.

The author then tells you about the “advantages” for these kids in a way that lets you know what he thinks of it. Not strict journalism, but nicely done, and you can definitely do something similar.

When Juan plays soccer with his friends he plays barefoot, wearing sneakers as gloves because he’s the goalie.

“He puts the ball into play, kicking it with the tip of his foot. Minutes later, he’s screaming in pain: His big toe is bleeding because he broke a nail. ‘Put your shoes on your feet!’ I shout over to him. ‘They’re too small for me,’ he responds. ‘My feet are bigger than they are.’”

Mr. Cortés asks Juan what he wants to be when he grows up.

“‘I want to be a truck mechanic when I grow up and not keep filling [the brick molds with clay] because it’s messing up my hands and I’m getting scars,’” he replies.

Self-Narration, Cigarettes, and the “Minister of Mines”

In “The Price of Pre­cious” by Jef­frey Get­tle­man, the author inserts himself into a great deal of the story. First, along with a photographer, they drive into an army of children carrying rifles. They are in the eastern side of the Democratic Republic of Congo.

That, plus less than five bucks, allows them on their way down the “bumpy dirt road.”

His first stop is to see the “minister of mines,” presumably because they have to get permission to see the mines. Unfortunately, the “minister,” an “enormous man…[who] wears a cheap, silvery blazer stretched awkwardly over the thick rolls of fat on his back,” calls them spies and arrests them.

After a five-hour drive to Bunia, “soldiers interrogated us in the small, dark house in Bunia for hours: ‘Who took you to Bavi? What was the purpose of your trip? Where did you go?’ they shouted.”

They were eventually released, but the colorful language of the piece adds flavor from the minister to the child soldiers to the government soldiers.

“‘You stumbled into a game,’ explained a United Nations official with years of experience in Congo. ‘They are all sharing the illegal spoils. It’s a scramble. It’s grab as much as you can.’”